Written sheet music, and hence any accurate record of music, dates to around 1000 AD, so it is almost impossible to say much about what music actually sounded like prior to that. Obviously, this does not preclude the likelihood of intelligent thought about music before this point, and it certainly doesn’t imply that music wasn’t being made. Today I’ll give a brief overview of some key developments in musical thought which preceded written representations of music and I hope to illustrate something of the mystery of music to point towards its importance as an art form.

Music is very old. Stone age flutes have been found in disparate parts of the world dating as far back as 43,000 years ago. This implies that the impulse to make music could be even older, that singing and clapping predated even the earliest instruments. It seems that we humans have had music since we have had culture. It’s also a universal truth that humans enjoy music, that it is part of our nature. I don’t mean enjoy like you enjoy an ice cream on the beach – humans universally seem to respond to music like it is something sacred. It is also pretty conclusive (despite the odd gimmicky research piece) that animals do not respond to music. Something particular about human consciousness compels us to create and love music. 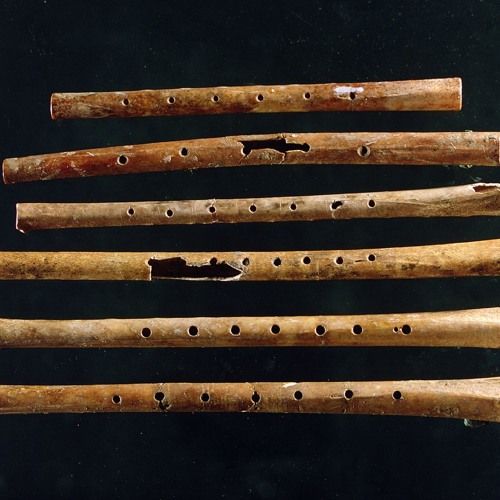 Why should this be? Given the utter universality of music, you may presume there would be some consensus explaining its evolutionary purpose, but nothing of the sort has emerged. It seems likely that music was used for early religious ritual, but this does not explain why music has been so consistently at the heart of everything humans hold sacred. What is it about those patterns and proportions that have the capacity to spark something so deep in the human spirit? Some of the most sophisticated early answers were put forward by the ancient Greeks.

The Greeks: harmony as sublime

We have understood early man’s music solely through archaeology so far, but with ancient Greece (12th C. BC – AD 600) comes a truly rich literary culture including accounts of instruments, performance and even mythological explanations of musical value. The Greeks had percussion, wind, and string instruments, some of the most famous being the syrinx (the pipes of the wild, goat-like god Pan, hence ‘pan pipes’) and the lyre (stringed, below). 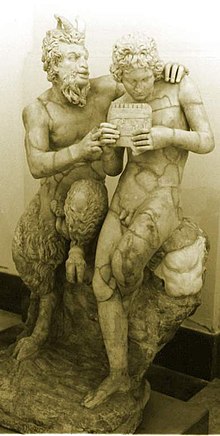 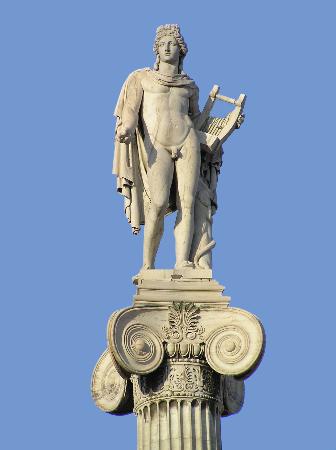 The lyre was held in special esteem by the Greeks. They believed it was invented by the most precocious of the gods, Hermes, on the day he was born. Having stolen cattle sacred to Apollo, the infant troublemaker dried their guts to make strings which he stretched over a tortoiseshell frame. The Greek gods were famously vengeful, so it is quite remarkable that Apollo not only accepted the gift of Hermes’ Lyre, but that it became Apollo’s sacred symbol.

Apollo was revered as the god of order and harmony and is usually depicted holding a lyre to represent the beauty of concord. To the Greeks, that beauty which arises from order was Apollo’s blessing – hence when things run to schedule, when you feel the satisfaction of an organised desk, and when we apprehend the beauty of well-designed music, these are Apollo’s domain. The lyre was often used to accompany expressive poetry known as lyric poetry (lyre-ic), hence the lyre lives on today in our word lyrics.

Apollo’s son, Orpheus, is the subject of a famous tragedy in which he moved all creation (even the gods, the beasts of the underworld and inanimate objects) with the sorrow of his music. Another tragic myth involves the mortal Marsyas challenging Apollo to a musical duel. Marsyas was a master of the Aulos (a sort of double oboe, see below) who believed himself to be a match to the great Apollo. Ultimately, no matter how much complexity and brilliance was in Marsyas’ playing, Apollo could play it all back with the addition of harmony on his lyre with many strings: Marsyas would play one brilliant melody, Apollo would play two or three brilliant melodies simultaneously. For his hubris, Marsyas was skinned alive. 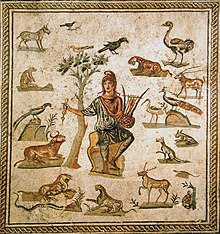 Aside from a cautionary myth about challenging the gods, this story captures the Greek idea of the sublimity of harmonic order. An interesting side note is that the aulos was commonly associated with Dionysus (the god of wine, revelry, ritual madness, and chaos). Hence this duel was symbolically a battle between the Apollonion (order) and the Dionysian (chaos). Whilst later Greeks (famously Plato and Pythagoras) would emphasise the primacy of order and reason, it seems that earlier Greeks esteemed Dionysian disorder without necessarily maligning Apollonian order (and vice versa). Something about the ritual opposition of these forces is ever present in music. A Beethoven symphony may be utterly wild in its emotions, yet derives them from a single theme; the freewhelling expression of improvised jazz is underscored by a unifying theme and harmonic structure; even in today’s music festivals the order of hip-hop and EDM beats meets the chaos of intoxicated riot.

At the heart of all good music is a balanced dialogue between what is familiar (hence ordered) and novel (hence, at least partially, chaotic). If music is too ordered it becomes repetitive, irritating and inane (this applies to the vast majority of club music in my estimation). If music is too disordered it becomes incoherent, meandering and frustrating to the listener. The main challenge to all composers is simply this: how do I make a piece of music which sounds like it all belongs together, whilst still sounding fresh and vital by its novelty and contrast?

Sadly, we have no idea what ancient Greek music sounded like, but their ideas about music prompted timless questions which still puzzle and stun listeners to this day. In lieu of Greek music, I’ll share a lesser known yet beautiful work by the English 20th-century composer Vaughan Williams: Orpheus and his Lute (from Three Songs from Shakespeare, 1926). The song sets a poem by Shakespeare recounting the grief of Apollo’s son Orpheus as he moved all existence with his music.

Orpheus with his lute made trees

and the mountain tops that freeze

Bow themselves when he did sing:

To his music plants and flowers

Ever sprung; as sun and showers

There he made a lasting spring.

Every thing that heard him play,

Even the billows of the sea,

Hung their heads and then lay by.

In sweet music is such art,

Killing care and grief of heart

2 thoughts on “1: The Prehistory of European music”